Home > About Us > History of Trinity Church 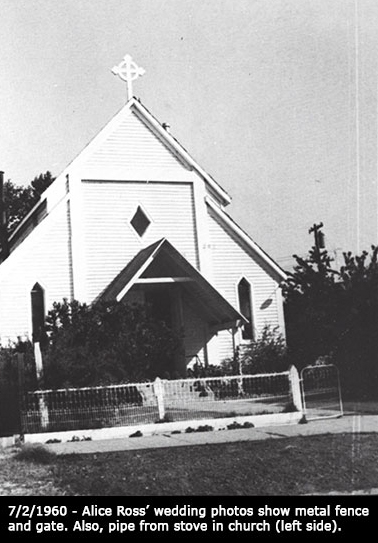 Trinity Church was founded during the Gold Rush period of California history, and is notably the third oldest Episcopal church in Northern California. During the period 1856 to 1862 Folsom was a rapidly growing frontier community. It was a terminus for the Sacramento Valley Railroad, the Pony Express overland mail route, and twenty one different stage lines servicing the northern gold mines. In response to the spiritual needs of the Folsom community, the first recorded church service was officiated by the Episcopal theologian Reverend Dr. F.W. Hatch of Sacramento, on July 18, 1856. During those early 49er days, worship services were held in the old Hook & Ladder Company Hall, located in the center of Folsom on Sutter Street.

The original church building was constructed in the classic Carpenter Gothic style of the day for a cost of approximately $2,500. Construction began on April 15th, 1862, and was completed that summer. Because the original architecture has been carefully preserved for over 150 years, Trinity Church is listed in the Survey of Historic American Buildings. It is also recognized as the oldest house of worship in Folsom still being used for weekly services.

Church records reveal that prior to 1954 there were long periods of time when services were held infrequently, or not at all. During that time Trinity Church was designated as an Episcopal Mission Church, under the auspices of the Episcopal Diocese of Northern California, and did not have a full-time priest. In that year Father Tom Ward was installed as the first resident priest and Vicar of Trinity. By 1979 the church membership had grown enough to become self-supporting, and Trinity was re-designated as a Parish by the Diocese. Father Todd Bruce is our current Rector, and has been leading our worship services, and providing spiritual guidance for the Trinity congregation since 2012.

As the congregation has grown over the years, so has the Trinity Church campus. In 1961 the first of two Historic District homes, adjacent to the church property, was added. This building, donated by a parishioner, has housed the Trinity Thrift Shop, providing the local community with modestly priced clothing and household items for purchase. Proceeds from sales benefit Trinity Church and many area charities. The second home, Trinity House, was purchased in 1972, and has served as the church office building for the Rector and staff. Additionally, in 1994 a Parish Hall was constructed behind the main church building. This facility provides the church with a fellowship hall, a kitchen, and several meeting rooms for Sunday school, youth groups, adult classes, and social functions.

In September of 2020, with the campus already closed due to the COVID-19 pandemic, the congregation packed everything up and started construction for a major expansion and renovation project. The church building was expanded and made more accessible, and the historic portion of it restored and rehabilitated. Notably, the original Romanesque arches, hidden for many decades inside of a wall, were opened up. The Parish Hall was also renovated, and the house on Mormon Street, long used as a rental property, was renovated to serve as a building for the children of the parish, with the nursery, the Children’s Chapel, and the kindergarten and elementary Sunday School classrooms all moving in.

Drop-in visits are welcome - For after-hours appointments contact Father Todd 916-985-2495, or by emailing.

About Us
Worship
Learn
Serve
Fellowship